ATHENS — So far this season O.H. Ivie Reservoir has produced nine largemouth bass weighing 13 pounds or more that have been entered into the Toyota ShareLunker program. All were special fish to the anglers who caught them, but the ninth was a little more special than the others: Sam Callaway of Corpus Christi will collect $500 a pound for his catch, a total of $6,670.

Callaway caught Toyota ShareLunker No. 500 at 9:20 a.m. April 9 using a Zoom Magnum eight-inch lizard in watermelon/red. The 13.34-pound fish was immediately taken to an official ShareLunker weigh and holding station, Concho Park Marina, where it was held for pickup by Texas Parks and Wildlife Department (TPWD) ShareLunker program manager David Campbell. The fish, which is 20.5 inches in girth and 26.25 inches long, now rests in the Lunker Bunker at the Texas Freshwater Fisheries Center. 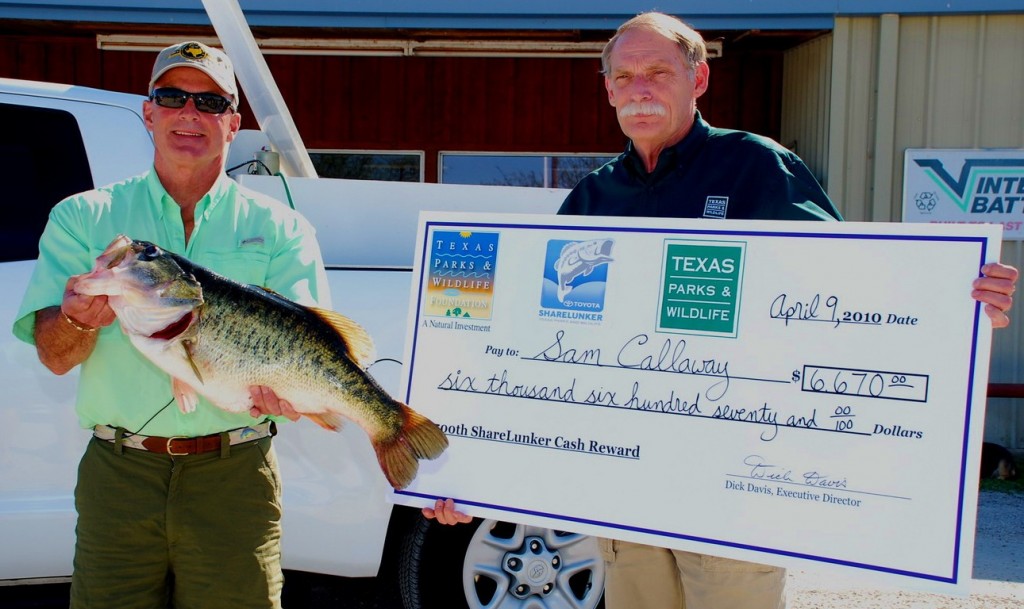 Callaway caught his big bass on the first day of the Permian Basin Oilman’s Bass Invitational, an annual event that raises money for the Make-a-Wish Foundation. The sixteen tournaments held to date have raised more than $1.5 million for the cause.
All participants in the tournament are subject to a polygraph test. Participation is limited to 250 two-person teams and is by invitation only. Callaway placed eighth in the tournament.

“Since the tournament is held to benefit the Make-a-Wish Foundation, the payouts are not huge,” Callaway said. “Mine will amount to a couple of thousand dollars. Catching the fish was a huge piece of luck-a blessing. It’s one of the greatest things that’s ever happened to me as a fisherman, and I’ve been fishing for 29 years.”

Callaway’s $500 per pound reward continues the practice of rewarding centennial catches of entries into the ShareLunker program that began with Jason Baird’s catch of ShareLunker 400 from Lake Amistad on February 28, 2006. That fish paid the Gypsum, Kansas, angler $400 a pound. Callaway will also receive a rod and reel package valued at $650 from G. Loomis and Shimano.

With almost three weeks to go in the current ShareLunker season, speculation now turns to how many fish will be entered into the program this season. Callaway’s fish brought the total to 29, which is well above the program’s 23-year average of 20.

Anyone legally catching a 13-pound or bigger largemouth bass from Texas waters, public or private, between October 1 and April 30 may submit the fish to the Toyota ShareLunker program by calling program manager David Campbell at (903) 681-0550 or paging him at (888) 784-0600 and leaving a phone number including area code. Fish will be picked up by TPWD personnel within 12 hours.

ShareLunker entries are used in a selective breeding program at the Texas Freshwater Fisheries Center (TFFC) in Athens. Some of the offspring from these fish are stocked back into the water body from which they were caught. Other ShareLunker offspring are stocked in public waters around the state in an attempt to increase the overall size and growth rate of largemouth bass in Texas.

Anglers entering fish into the Toyota ShareLunker program receive a free replica of their fish, a certificate and ShareLunker clothing and are recognized at a banquet at the Texas Freshwater Fisheries Center in Athens. In addition, if a Texas angler catches the largest entry of the year, that person receives a lifetime fishing license.

For complete information and rules of the ShareLunker program, tips on caring for big bass and a recap of last year’s season, see http://tamus.pr-optout.com/Url.aspx?513992x818173x-744357 . The site also includes a searchable database of all fish entered into the program along with pictures where available.

Information on current catches, including short videos of interviews with anglers, is posted on www.facebook.com/sharelunkerprogram .
The Toyota ShareLunker Program is made possible by a grant to the Texas Parks & Wildlife Foundation from Gulf States Toyota. Toyota is a long-time supporter of the Foundation and Texas Parks and Wildlife Department, providing major funding for a wide variety of education, fish, parks and wildlife projects.