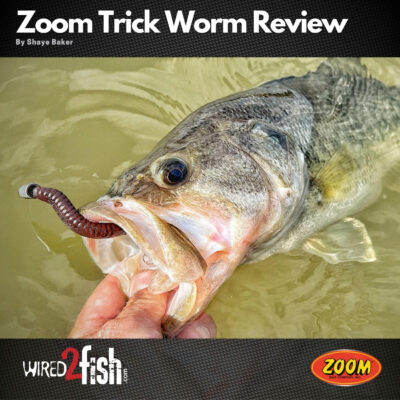 The original floating worm is a classic, which makes it no surprise that pros have realized that its straight, slender profile is perfect on the back of a shakey head or Carolina rigged when fish have seen every other lure under the sun. Wired2fish highlighted the Zoom Trick Worm in the most recent tackle review, continue reading to learn how the Trick Worm has become the gold standard amongst anglers.

The Zoom Trick Worm for bass fishing has been around for ages now. It has been the gold standard for generations of anglers who were looking for a simple, but extremely versatile bass fishing bait that would catch fish in almost any and every situation imaginable. Today, we’re going to give a fresh review of this old classic and make sure you’re not sleeping on what many consider to be one of the most effective baits of all time at getting bit. A trendsetter for sure, with lots of ways to rig it.

ELEGANTLY SIMPLE
What now seems to be one of the simplest and most replicated baits of all time, the Trick Worm was truly revolutionary when first introduced by the Zoom Bait Company over four decades ago. A straight tail, a flat bottom worm with varying widths as you work your way up and down the bait, there was quite a bit of thought that went into designing this lure.

What’s been interesting to see over the years is how the use of this seemingly simple worm has evolved time and time again with new techniques. By moving the hook around and positioning weight in different places, the action of the worm and the overall presentation of the bait changes dramatically. And that’s all made possible by the original design of the lure.

WACKY RIG
Looking at one of the more popular ways to rig this worm, you can see what I mean by the bait’s design allowing for a unique action to come out of the lure. Starting at the nose of the bait, you’ll find a relatively thicker body through the first half of the bait. Then the lure begins to taper down towards the tail, only to widen out once again for the darter-style tail that looks somewhat like a stretched diamond.

When you wacky rig a Trick Worm by placing the hook near the middle of the bait, you get some really subtle but evident wobbling action from the worm on the fall as the bait undulates. This is all due to the varying thicknesses of the lure from head to tail and is just one way that anglers have found to make this worm do some pretty cool things.

WEEDLESS
There are several ways to fish a Trick Worm weedless as well. If you Texas rig the bait with no weight, you can twitch it along the surface like a floating worm. This is one of the most effective ways to fish this lure in the spring, as bass are shallow and looking to spawn. Add a bullet weight and now you have a more traditional Texas rig that can be fished on the bottom around and through the cover.

Then we have to mention one of the most revolutionary ways that ever came along to rig a Trick Worm… the good ol’ shaky head. For many anglers under 30 years of age, you probably can’t remember or even imagine a time in fishing where a shaky head wasn’t just a given fish catcher. But there was a time before the shaky head and one of the baits that fit it best and helped skyrocket the shaky head to a mainstay in every angler’s tackle box was none other than the Zoom Trick Worm.

ADDING WEIGHT
Taking a Trick Worm, you can add weight to it in a handful of different ways to again tap into this bait’s versatility. We already mentioned the Texas rig and shaky head approach. But a Trick Worm also works extremely well on a Carolina rig and a drop shot as well, again adding weight to the bait in different ways with these rigs.

Another of the more popular ways to rig the Zoom Trick Worm now comes by way of the Neko rig. Using a small weight or even a nail, you can weight one end of the worm down and help the bait sink a little faster, while still keeping a super-finesse approach. You’re essentially fishing a weighted wacky rig at this point, but being able to get this finesse presentation deeper means more bites from pressured fish than you’d likely be able to get on a Texas rig or jig for instance.

SALT CONTENT AND COLOR OPTIONS
The salt content of the Zoom Trick Worm makes it such a versatile bait because it helps the bait almost suspend in the water. Rigged weightless, the worm will sink slowly (in part due to the weight of the hook). But still being able to twitch the bait and keep it close to the surface and pause it to let it sink slowly makes for an extremely natural look when compared to an actual worm slowly sinking to the bottom.
As far as colors go, I’m not sure you’ll find another bait with more color options out there. Zoom Bait Company has always been good about offering lots of color options in their bait lineups, but there’s likely not a color you could come up with that they don’t offer in the Trick Worm.

Coming in at $5.49 for a pack of 20, this 6 1/2-inch soft-plastic worm is about as affordable as it is versatile. It’s a long-time staple for most bass fishermen and one you should definitely try if you haven’t already.

The Zoom Trick Worm is available at the following online retailers: