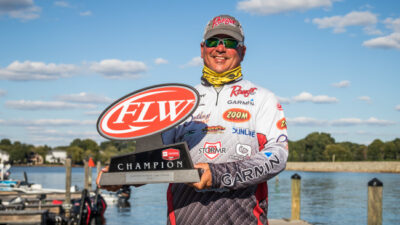 Many anglers in the realm of professional bass fishing have niches. Some are shallow water experts, some are grass-fishing experts and some shine on smallmouth waters. Troy Morrow of Eastanollee, Ga., has a penchant for offshore fishing, specifically technical offshore fishing that involves the use of electronics.

This week at the Toyota Series Eastern Division event on Lake Norman, Morrow proved why he is considered one of the best with electronics on offshore structure by winning the event in ultra-tough fall conditions with spotted bass caught from waters as deep as 40 feet. Over the course of three days, he hauled in weights of 10 pounds, 6 ounces, 12-6 and 9-7 for a three-day total of 32 pounds, 3 ounces.

“I don’t really know why, but I’ve always loved using electronics to fish out deep and explore the underwater world out there,” Morrow says. “Every time there is some kind of innovation or advancement in sonar, I’m one of the first to get it and figure out how to use it. I’ve done it with liquid crystal displays, side imaging, down imaging, and more recently, the LiveScope forward-facing sonar. I’ve had a LiveScope for about two years and have spent hundreds of hours on the water with it, learning what I’m looking at, learning what fish look like, and more than anything, observing fish’s attitudes and reactions.”

Many in the tournament were surprised to learn how deep Morrow was fishing at Norman. He says Norman reminds him a lot of Lake Keowee in South Carolina.

“In the fall and winter fish go really deep on Keowee because there is no timber for them to suspend in,” he says. “So they get out there in 50, 60 sometimes 70 feet on offshore shoals. To me, Norman sets up just like that. And once I started seeing fish in that 20- to 40-foot range, I knew exactly how I would fish the tournament here.”

Morrow spent practice graphing, humps, shoals and the deepest docks he could find. In all, he marked about 200 places that looked good. While 200 might sound like a lot, Morrow says the LiveScope helped him efficiently weed through many of the spots during the tournament.

“I can tell how spooky the fish are, how aggressive they are, if they are feeding or if they are just sitting down there sulking,” he says. “I can watch their reaction to my lures and see how fast they follow it down. After a while, I learned what looked right and when to stay and what looked bad and when to leave.”

Each day Morrow hit between 30 and 40 places he had marked from practice and he rarely repeated water.

“In the old days I might only fish about 15 or 20 places per day, because I felt like I had to fish so slow and thoroughly,” he explains. “But with LiveScope I’m much more efficient. I can fish double the number of spots because if they’re not there, spooky, or not acting right, I just move on. Like, one thing I noticed immediately is if I caught a fish, a lot of the times the rest of the fish would leave. Knowing that kept me from wasting time on unproductive water.”

Morrow’s primary lure all week was a shaky head with a Zoom Finesse Worm on a 3/16-ounce Gambler Giggy Head instead of a drop-shot.

Morrow says one of the amazing things about LiveScope is watching a fish eat a lure on a long, deep sink.

“If they race down to it while it’s sinking and the fish looks like it has passed your lure, it already has the bait,” he says. “I also learned if a fish followed it all the way to the bottom and just sat there, I would dead stick the bait – let it sit there, sometimes as long as 30 seconds – and eventually the fish would eat it, especially if another fish came swimming up to the scene.”

In addition to the shaky head, Morrow also threw a 5/8-ounce Southern Hook Southern Spin underspin with a Zoom Boot Tail Fluke to single rocks and stumps as deep as 30 feet. A Carolina rig also claimed a couple of weighing fish as well.

Morrow’s win at Norman marks his fifth FLW win. He has also has won two Phoenix Bass Fishing League Regionals and the All-American. But this is his first Toyota Series trophy.

“This feels good,” Morrow says. “To come here and do my thing against these guys and win feels good. I’ve won at the BFL level several times but a win at this level has been a long time coming.”