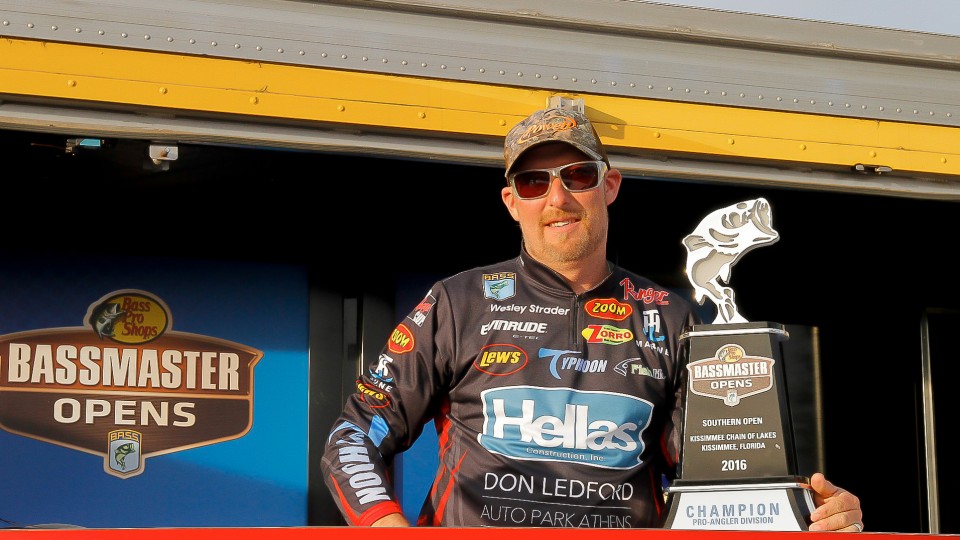 By winning the first Bassmaster Open of 2016 – the Southern Open on Florida’s Lake Toho — Tennessee pro Wesley Strader became the first angler to qualify for the 2017 Bassmaster Classic, which will be held on a site yet to be announced. Strader’s no newcomer to tour level championships, with 15 Forrest Wood Cup appearances under his belt, including seven in a row, and this will be his second Classic. He fished the 2003 version of the event on the Louisiana Delta.

Strader’s last major win came at an FLW Tour tournament on Lake Ouachita in Arkansas in 2002. He admitted that early in his career Florida didn’t suit his fishing style. “When I first started fishing professionally, it was my nemesis,” he said. “I didn’t understand how to fish natural lakes. But in the last four or five years, I’ve had some good finishes down there. Mostly I’ve learned that you have to stay put, you can’t run around.”

“Not only do they make the best plastics in the market, but they give me the confidence to go anywhere in the country with them,” he said.

So does he prefer to fish a single lure all tournament or vary his presentations by the moment?

“Someone asked me the other day if I’m a specialist or a generalist,” he recalled. “I consider myself a generalist, able to do a lot of things well, but at some point in every tournament you have to become a specialist.” With ZOOM products in his boat, they enable him to adapt to changing conditions and the changing moods of the fish.

They probably had ZOOM Super Flukes, too, but it’s a safe bet that most of them didn’t fish them the way that Strader did.

“Years ago, I learned from some old-timers, possibly Sandy Melvin, that if you peg a 1/16 ounce weight to the nose of a Super Fluke and pitch it into holes in the grass, there’s something about that spiraling action that makes them bite it,” he said.

“That fluorocarbon is crucial,” he said. “It helps it to sink the right way. It falls really, really slow. It’s hard to go above 16 pound test because then it’s harder to cast and it won’t fall right.”

He typically won’t go above the 1/16 ounce Reins Tungsten weight, either, because that’s exactly the right amount of additional impetus to make the lure’s death spiral so seductive. He pitches it around just about any kind of vegetation – from Kissimmee Grass, to eelgrass, to hay or even hydrilla. The key is to find places where the fish are likely to spawn and go to work.

When it comes to colors, he keeps it simple, employing shades of watermelon exclusively. He doesn’t know whether it represents bluegills or shiners or something else, but hours on the water honing this technique has proven to him that those patterns are head and shoulders above any others.

He also uses a 4/0 Lazer TroKar hook, which is sticky sharp. When he feels the fish moving with the bait he resists the urge to jack them into the next county. “I don’t like to set it real hard,” he explained. He simply leans into them and gets the fish to the boat quickly. It’s money in the bank.