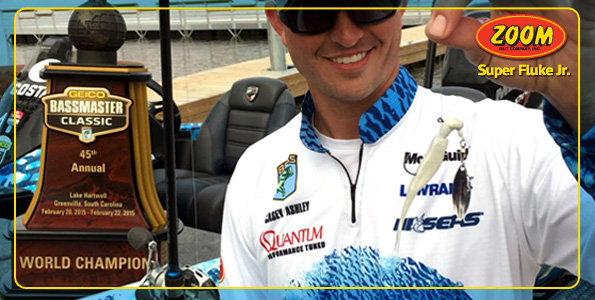 While much noise has been made about the garage-made underspin that Casey Ashley used to win the 2015 Bassmaster Classic, comparatively little ink has been spilled about the soft plastic lure that he put on the back of it. That lure, the Zoom Super Fluke Jr., is a silent killer. While its big brothers are popular lures among all walks of bass anglers, the Junior version is still underutilized.

“That’s my go-to bait for the underspin in cold water conditions,” Ashley said. “That’s when you turn that ‘fish head spin’ slowly and keep it as finesse as possible.” 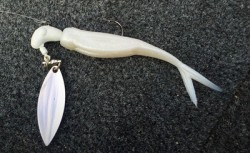 He’s also used the regular Zoom Fluke on the back of his underspin, but said that the Super Fluke Jr. “has a little bit bigger profile and a little bit thicker head, which makes it easier to get it on straight.” That rigging posture – without kinks or bends – is critical to making it natural looking to the bass. “You don’t want to weave the hook through the plastic. It has to come out of the center.” He’s also tried baits like the Swimmin’ Super Fluke Jr., and said they have their time and place, but not when he wants to crawl the lure across the bottom. “The Swimmin’ Fluke has more resistance, which makes the bait rise.”

At Hartwell, many competitors found a strong bite in the first part of the morning, only to see it end abruptly. Ashley knew that he could extend that bite by “fishing it on the bottom painfully slow.”

“With that little tail quivering, they absolutely smoke it,” he said.

He keeps his colors simple with the entire Fluke family, relying overwhelmingly on White Pearl. “I don’t care which one you throw, whether it’s the Fluke, the Super Fluke or the Magnum Fluke, that’s my go to color, period,” he said.

Check out the photos below from Casey Ashley’s victory at the 2015 Bassmaster Classic.