Straight Tails Get the Job Done 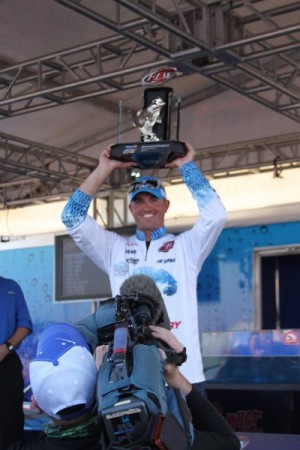 When the Bassmaster Classic kicks off this week, many eyes will be on local favorite Casey Ashley, a known Hartwell hammer. If they examine his boat closely they’re likely to notice the presence of Zoom Trick Worms. That’s not because of anything specific to the host venue, but rather because he doesn’t ever leave home without them. From New York down to Florida and west to California, they’re a staple in his boat year round.

At Hartwell, he’ll be fishing them on shakey heads, and you can be just about certain the worms will be green pumpkin. “It’s the most natural color ever made,” Ashley said. “It catches fish whether the water is gin clear or dirty.”

He speaks less about his use of the Zoom Finesse Worm, but it’ll also be a part of his game plan at Hartwell. How does he choose which one to thread on? “It’s usually just which one I grab first,” he joked. Then he got serious. “Actually, it depends on the size of the head I’m using. With a 1/8, I’ll usually start with the Finesse Worm. If I’m using 3/16, I’ll take a Trick Worm and bite off about an inch so it fits up snug against the head.”

In his 2014 FLW Tour victory on Hartwell, Ashley used the Finesse Worm for his worming presentations, relying not on his favorite green pumpkin, but rather on gourd green and watermelon candy. Other than not using these straight tailed worms, what’s the biggest mistake that he sees anglers make with them early in the season.

“They definitely fish them too fast,” he said. “At this time of year you need to take your time.”