When the Bassmaster Classic kicks off this week, Casey Ashley certainly won’t be the only competitor to have a jig or two on the deck of his bass boat. A jig and chunk or jig and craw is a known producer at this time of year on Lake Hartwell. The thing that will distinguish him from many of the other anglers is the confidence that he has in his chosen trailer. While he’s been known to mix up his choices on occasion, he consistently finds himself reverting to the Zoom Super Chunk Jr. for many applications.

“It casts well and skips well,” he said. “At the same time, it still gives a big bait profile, and in deep water applications it gets to the bottom quicker.”

In addition to the profile, it’s the lure’s action that makes it so effective at this time of year.

“Pay attention when you’re winding it in,” Ashley advised. “It doesn’t move a lot. Instead of that big kicking tail motion it just shimmies, like a baitfish.”

Ninety percent of the time he goes with his reliable green pumpkin models, but he’s been known to mix up the color selection on occasion. Other favorites include black and sapphire blue, the latter in “super dirty water.” He also likes root beer, which is “really good in river systems where the water is tannic. I’m not sure why, but they love it there.” 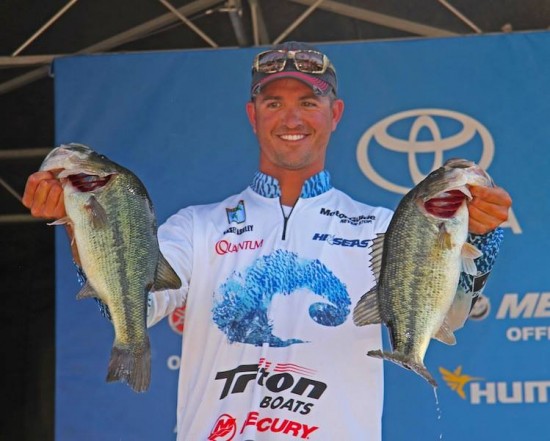