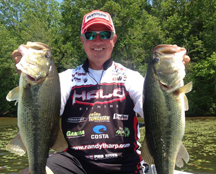 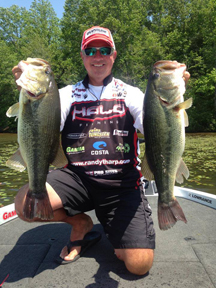 Randall Tharp, the 2013 Forrest Wood Cup Champion and a noted big fish pro, has joined the pro staff of Zoom Bait Company, the pros’ choice for soft plastics when it comes to everything from ultra-finesse to oversized lures. If there’s a specific situation at hand, Zoom offers a lure that excels in that application.

“It doesn’t matter if you’re fishing in your local pond or you’re competing in the Bassmaster Classic, Zoom baits are the very best and catch fish all over the world,” Tharp said.

In a relatively short time on the national fishing scene, he’s amassed a tremendous list of accomplishments on circuits including both the FLW Tour and, more recently, the Bassmaster Elite Series. In addition to the Forrest Wood Cup victory on Louisiana’s Red River, he’s added an FLW Tour Open victory on Lake Okeechobee and three Bassmaster Open victories – on Ross Barnett, Santee Cooper and Guntersville. What do those bodies of water have in common? Most likely it’s that they harbor big fish in gnarly cover, most often grass. While Tharp has proven exceptionally versatile over the years, it’s those big fish, heavy cover situations that call out to him most.

“My first national win was the 2008 EverStart championship on Lake Eufaula,” he recalled. “The winning lures were a Zoom 6-inch lizard, a Zoom Big Critter Craw and a Chatterbait with a Zoom Speed Craw trailer. That seems like a long time ago but one thing hasn’t changed – Zoom is a company that is obsessed with building the very best lures you can use to catch a bass, and their lineup gives me everything I need to do my job.”

Tharp competed in five consecutive Forrest Wood Cups from 2010 through 2014, and next month he’ll compete in his third Bassmaster Classic. Savvy followers of the sport expect him to be in the running to become one of just a handful of pros to have won both major championships – and if that happens you can bet that Zoom baits will be a part of it.